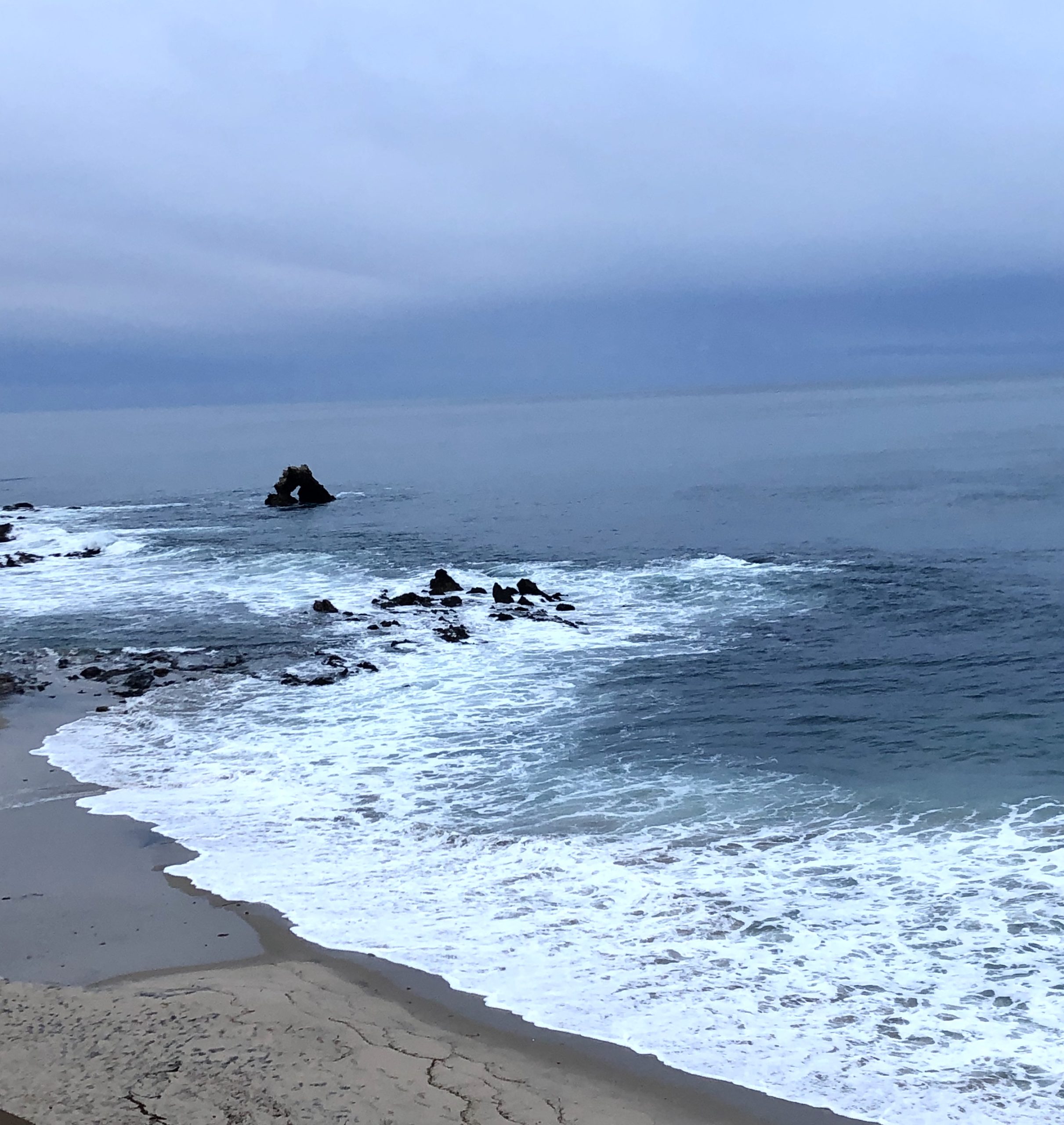 It’s early March, I’m in New York City. Nobody’s wearing a mask yet. Oblivious or incredulous, we’re all standing shoulder to shoulder at stoplights, sitting knee to knee on subways, and you can see our breath.

I’m up early preparing for podcasts with old friends, one a comedy writer who will, during our recording, teach me how to write a joke. He uses Coronavirus as the topic. That’s sort of where we’re at: the stage before grief.

The other friend runs big events and media about the restaurant industry, which the virus soon began to decimate–aside from standouts like Chicago’s legendary Alinea Group, which taunted COVID-19 with its Coronavirus-themed canapé.

Two weeks later, New York City is a ghost town. You know what happens next. I escape just in time.

I would try to rise with my wife in Kuwait around 6 a.m., but one of us would turn sleepiness into enough magnetic energy to pull the other back in for another magical 10 minutes before we would allow the possibility of a new day. I would walk her down to the waiting motor pool just to catch the last smile, and sometimes we would defy the local law against public displays of affection and steal a kiss. Rebels, we.

Mid-March, next stop Huntsville, AL, home of the U.S. Space & Rocket Center. In a Google search query of what Huntsville is known for, the fourth entry in the ‘People Also Ask’ carousel is “Can you marry your sister?”

Huntsville is also home to most of my family, including my sister, who is married, but thankfully not to my brother. I promise you he’s never even used Google.

I take my brother out on the town for some sibling hijinks. He never disappoints with his witty asides, observations and teasing. At home he sneaks Mountain Dews in his bedroom, eats brownies and ice cream and hot cocoa to top off the day, and looks dismissively at anything green. I get the woman behind the counter to slip some spinach into his chocolate (cacao; don’t tell him) smoothie. He doesn’t even notice. He drinks it in five seconds, and despite the straw, he manages a thin chocolate mustache. Did I mention he really never disappoints?

Life is slow in Alabama. I suppose it gives you time to ask Google strange questions. My parents have Alexa, which they seem to use solely to set kitchen timers for the brownies. Occasionally they’ll ask it something softly from across the room in their aged voices and wonder why it doesn’t respond. I doubt they think it’s progress.

We sit and talk, remember old times, tell the same jokes, go through estate plans, complete word searches. The big excitement is Nerf gun wars with my nieces and nephews. My father keeps an impressive arsenal. I hope it’s mentioned in the will.

My brother takes long, daily walks on the main road, so I go with him. We see an alligator down by the man-made lake. It looks real, and my dad lets me think it is for a couple days, sitting idly by when I tell people on the phone. Payback for Nerf bullet headshot?

After my wife left for work, I would walk across the street for my morning exercise along the Corniche, mask donned against poor air quality, ocean waves crashing against the shoreline. Sometimes I would end with a half hour of shooting baskets alone at courts nearby. I would shower and make coffee, then read or practice Arabic. Sometimes I would write, and Anna had begun to teach me to draw. We began with a face; I made the lips too wide she says.

I fly to California for some meetings and more podcast recordings, this time with the founders of Tenzo Tea, a Matcha tea company in Los Angeles, and then with one of the all-time legends in coffee, Martin Diedrich. On our way to Kean’s, Martin’s coffee shop in Costa Mesa, Anna calls to tell me Kuwait is going to shut its airport in a couple of days. I should finish what I’m doing, pack up and catch whatever flight I can.

The flight plans are in the works, we finish the podcast buzzing with caffeine, and I head back up to LA to pack and leave. But Anna calls: the airports are closed to anyone who isn’t a Kuwaiti citizen. I’m now stuck in Los Angeles indefinitely.

I would nap until 2 p.m., and then it was time for work. Those early hours were the best. I’d catch up from the night before in the quiet hours in America. Anna would come home around dinner time, and I would take a break so we could eat together. Around midnight I would finish work, meditate or just listen to some calming music alone in the dark and then climb in bed.

For the past four months, I’ve been living in one of the toniest zip codes in America. Corona Del Mar sits between Newport Beach and Laguna Beach. Anna grew up with Melanie Weitzman, my friend and host in Corona Del Mar. Mel’s house is a short walk to one of the most majestic stretches of Pacific Ocean coastline, with houses on the cliff that go for $25 million and up, complete with elevators and views that pictures can’t replicate. But here’s one anyway.

Every day, I wake up at 5 a.m. to beat the crowds walking dogs and jogging, most often maskless, ignoring signs and directional markers, because that’s where we’re at: onto denial or anger.

It’s a peaceful time, and I spend the second half of my walk talking to Anna about her day, which is just ending.

I have an office at the house, and Mel works more hours than I do, often at the office. I have my own room and bathroom, and there’s even a reading room, where I spend lots of my spare time if I’m not out on the front porch, sitting in the shade of the palm trees. During the day, I open the windows and let the cross breezes play. It never really gets over 70 degrees.

I cook, I exercise, I read. Mel makes me feel at home; not a visitor, but a part of the family. Her generosity overwhelms me: she pauses her shows so I can watch Last Dance, the Michael Jordan documentary; she records shows she knows I like and she rewatches them with me; she gives up her car whenever I need it. She introduces me to ‘90-Day Fiance’ and ‘Shahs of Sunset’ and ‘Housewives of’ . . .well, I’ve forgotten, but I’m sure it’s not Huntsville.

Before Memorial Day weekend, I take a couple days off, rent a Jeep, take the top off and drive up 101 to see my daughter in San Francisco. I crush the speakers with music and I sing at the top of my lungs. I relish the drive and the air and the dark green oak leaves against honeyed fields along the central coast. I stop and soak it in and think of Steinbeck and his obsession with the Salinas Valley. A picture couldn’t possibly capture it, but here’s one anyway.

I flirt with the idea of writing a show called ‘Shahs of Salinas’ or ‘East of Hedon.’ I keep driving.

In February, Anna and I planned a trip back to the U.S. Anna for a medical course, me to tag along. I scheduled other work in New York and Los Angeles, with a surprise visit with my parents squeezed in between. Because of growing concerns in Kuwait about the coronavirus and the nature of her job, Anna had to stay behind, but I continued with my plans.

It’s 115 degrees most days now in Kuwait. It’s practically climate controlled where I am. I’m free to cook and drive; Anna has no car and Kuwait has been under 24-hour curfew, living on delivered Dean & DeLuca. Movers brought our belongings while I’ve been away, and now Anna’s surrounded by boxes. I am feeling lonely and guilty, and there’s no end in sight.

I’ve practiced no Arabic. I’ve played no basketball. I stopped writing, and I’m stuck with the one failed drawing of a wide-mouthed face.

Anna and I found a few delights in Kuwait: a farmer’s market, an Arabic equivalent of Sur La Table, za’atar edamame, new friends, the call to prayer, sweeping views of ocean and sunset. We were planning a trip to the camel races, a visit from a friend, a journey to Oman.

It’s July and I’m now in Washington, D.C., staying at an Airbnb in Georgetown. I’ve always wondered what it would be like to live in the city, and in Georgetown especially. It’s blistering hot at 94 degrees, but that’s still 20 degrees cooler than Kuwait. My sister brings me groceries as I quarantine. I walk, masked, down to the waterfront, avoiding people and watching the air show on July 4. I read, I get up early each day for walks, I cook my own food. I’m writing again. I search Google images for narrower mouths to draw–the fourth ‘people also ask’ is “Are small mouths attractive?” Apparently.

I think about my journey, my almost-five month adventure–to New York, where I saw my niece and escaped Coronavirus, and to Huntsville to see my family, and to California where life’s too perfect, and to D.C. where I grew up and where history happens every day now in ways too difficult and swift to capture. But here are pictures anyway.

The adventure was supposed to be Kuwait. The Middle East and the hummus and the lamb and the endless rice and embassy gatherings. We were supposed to go to Cyprus and see my old friend Marios, who was taking us sailing around the Greek Isles. It seems like fiction now. How’d I end up here and Anna there?

In another week or so, my boyhood friends and I will take a local-flavored guys’ trip somewhere. My friend Wylie, whom I’ve known since middle-school, is wrestling with cancer. We all need this. For us and for him.

It’s way too early Sunday morning, Anna is video calling from Whatsapp. Something has changed. Her energy is different. She’s asking me about my plans with my friends, what days we’re traveling. Very purposeful. I’m groggy, but not for long: ‘When your guy’s trip is done, she says, we’ll fly you back. They’ve found a way to get you here.‘